Can Devin and Noah find love in a harsh, unloving world? 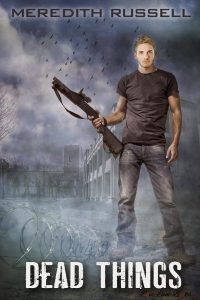 When Devin Reid returned home from his final tour in Afghanistan he thought he’d seen the worst of what people could do to other people. It turned out he was wrong.

The life Devin knew is gone. A deadly virus has infected the world’s population, leaving in its wake two types of people—survivors and monsters. Devin is a survivor, a man almost as broken as the world he struggles to survive in. Devin is part of a group who have found refuge in a high security penitentiary in Kansas State. Resources for the group are limited, but outside the safety of the prison walls, the newly-made undead monsters are hungry and hunting. It’s down to a handful of people like Devin to risk their lives scavenging the cities and highways to meet the demands on food and supplies.

On one fateful venture, Devin finds someone with the potential to change a dark future, destined for blood and heartbreak, into one of hope and second chances. He finds Noah Weber.

Together, Devin and Noah work to keep the monsters at bay, but do they have the strength to overcome the hurt and loss they’ve both suffered in the fight for survival? And find love in this harsh, unloving world?