Fallout is the fourth book in a six book series. The story can be read on its own or as part of the series, each book is from a different author, but all linked to the events and aftermath following a plane crash – Flight HA1710. 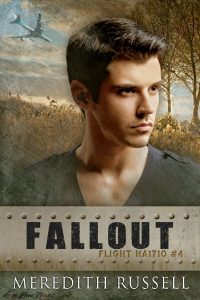 When Harrison Kelley is banned from getting on Flight HA1710, it seems to be the perfect ending to a crappy couple of days. Not only did he wreck a wedding, but he’s drunk way too much and been on the receiving end of the groom’s brother’s fists. Being escorted out of the airport by security was just the icing on the wedding cake.

Elijah Pettifer has lusted after Harrison from afar for years but Harrison never sees him as anything more than a friend. If he ever saw him at all. While attempting to defend what little honor Harrison has left, Elijah gets caught up in the wave of chaos surrounding his teenage crush. But missing his flight home because of Harrison’s mess might just be the luckiest thing to ever happen to him.

With a 24-hour ban imposed by the airport, and having only each other for company, the two men grow closer. But will the fate of the airplane they should have been on be the push Harrison needs to walk away from the toxic relationship of his past? And can Elijah make Harrison see exactly what he’s been missing out on because of it?

Other titles in the series in order of release:

Co-Pilot Lachlan Donaghue wakes up in hospital, a survivor of the crash of Flight HA1710, with memory loss and the suspicion that he could be at fault for the tragic accident. When everything becomes too much he is taken home to hide, back to the small Irish town he grew up in and to the home he once shared with Rory.

Rory Kendrick watches the news, sees every hour of the disaster unfold and somehow just knows that Lachlan was in the middle of it all. What he doesn’t know is that Lachlan will be forced to come back home to hide and to heal. Lachlan needs a friend, not a lover, but sometimes the lines are just too blurred to make any sense.

The crash of Flight HA1710 brings life into focus for Phil Stewart. Before meeting Davin Tierney, love seemed only a myth to Phil, but one night in New York City changed everything, giving him something he didn’t even know existed. But Phil wasn’t comfortable saying I love you. During the crash, Davin suffers a brain injury, leaving him in a coma. Phil wonders how love can be so cruel to give him Davin and then take him away so suddenly.

Davin never intended to give Phil a second look, but Phil broke through barriers and made amazing overtures before stalling on the word love. The crash changes everything, and he’s no longer willing to play it safe, but can Phil actually change from the playboy Davin first met?

Blythe Harris was taking his first flight to the USA and hopefully a whole new client base for his bespoke upholstery business. An adventure for him, he was both nervous and excited to attract the attention of a handsome steward. Things might have gone further – if Flight HA1710 hadn’t failed.

Marc Stafford is a self-confessed player, and he used his charm to seduce his cute passenger. But in the aftermath of the crash, he’s struggling to recover his confidence. The TV declares him a hero for saving passengers, but at night his nightmares trigger painful flashbulb memories of the crash.

In an Irish hospital, Bly realises that although his broken leg will recover, his career may not. And in Chicago, Marc can’t face returning to work. Neither of them can shake off the memory of their brief, sexy encounter. Both of them need to be with someone who understands exactly what they’ve been through. And on middle ground.

Richard Abbott finally overcomes his debilitating fear of flying, boards Flight HA1710 bound for Chicago, and when it crashes discovers that aviophobia isn’t the worst of it…

All his life Richard has been afraid of flying. He has no idea what caused it, but nothing and no one will convince him to get on a plane of any size. His job as a member of a major bank’s IT department in London does not require him to fly—until he gets promoted. If he wants to keep his job, he has no choice but to deal with his worst nightmare.

Camden Marsh is a certified life coach who enjoys helping people redefine their priorities and their life. He is on his way to Chicago to attend an international conference for coaches and trainers when he begins a discussion with the extremely nervous man sitting next to him. They have ba rely begun to explore their mutual interest when Flight HA1710 crashes and everything comes to a screeching stop.

Xavier Soto knew something as wrong with the jack screws but he couldn’t get anyone to believe him. After a plane crashed and his supervisor fails to take Xavier’s concerns seriously, he flies to Ireland to talk to an investigator.

Brent Clery didn’t believe his caller right away. But upon further investigation he decides to look into Xavier’s concerns. When they uncover a conspiracy to hide the truth about the crash, they have to pool their skills to find out what happened.

Death stalks their investigation and if they’re not careful they’ll be the next ones to die.