Welcome to my stop on the Scare Trail.

Horror – one of my favourite genres, particularly when it comes to movies, though I’m not sure when I really started to appreciate them and be so keen to watch the many good, bad and gory films out there. It makes me laugh because as a kid I couldn’t get past the scene on the moor in An American Werewolf in London, I skipped out on the last half of Aliens, decided I’d rather go strawberry picking with my uncle than stay to watch Critters, and dear God, though not really a horror, Running Man, once the first collar did its thing to that guy’s head, well, I was out of there. So yeah, I’m not sure when I changed my mind about them and what movie it was that did the changing but I absolutely love them.

In terms of picking a favourite, that’s a tough one. I have watched so many different movies- your classic slashers, those with more supernatural elements and spirits, aliens and monsters and crazy big animals, Japanese and other Asian horrors, and then some of the films like Saw or Hostel that love to ramp up the gore. I do, however, have one no-no, or at least it’ll be a one time watch for a film if at the end the killer is the last one standing – it’s more so in the ones where people are hunting people and it annoys me to no end. I watch horror movies for the badass soul survivor, or I’ll accept them taking the bad guy down with them. I don’t mind if there’s a sequel and said survivor bites it in the first five minutes and we follow a new protagonist, so long as the killer gets some sort of beating and comeuppance eventually. Yes, justice, revenge, death so long as one of them is served I’m a happy bunny.

So to actually name a few of my favourites, I’m picking some I enjoy watching over and over. Nothing on TV, want something on in the background, I stick on a horror film. So let’s go with a Top 10 hit repeat horror films:

Wrong Turn (hands off Eliza is mine), The Hills Have Eyes, 2006 (I cheered for that bloody dog!!), The Last House on the Left, 2009 (revenge is sweeeeeet), 28 Days Later (love the soundtrack on this one), I Know what You Did Last Summer (it has Sarah Michelle Geller in it and I am a Buffy ho), Lake Placid (don’t go in the water), Jaws 2 (no really, don’t go in the water), Dog Soldiers (Spoon!), Dawn of the Dead (both versions – own them both, love them both), The Fog (the original, only ever the original).

Okay 10 was actually hard as there are so many more I love to watch again and again. Darn it! *Coughs* The Crazies, Shawn of the Dead, Outlander, House of Wax 2005, Freddy Vs Jason, all the Friday the 13ths, Doom, the rest of the Jaws series (yes ALL of them)… *Coughs* Okay I’ll resist naming even more before you start judging my terrible taste and instead here is the…

Just leave a comment on this post and tell me what one of your favourite horror movie is. Or if you’re more of an RJ Scott and prefer to watch horrors from behind a pillow (I remember you ‘watching’ The Woman in Black), tell me which horror movie has had you reaching for a cushion. Competition open until late October 31st.

You can find links to the other stops on the scare trail below the graphic: 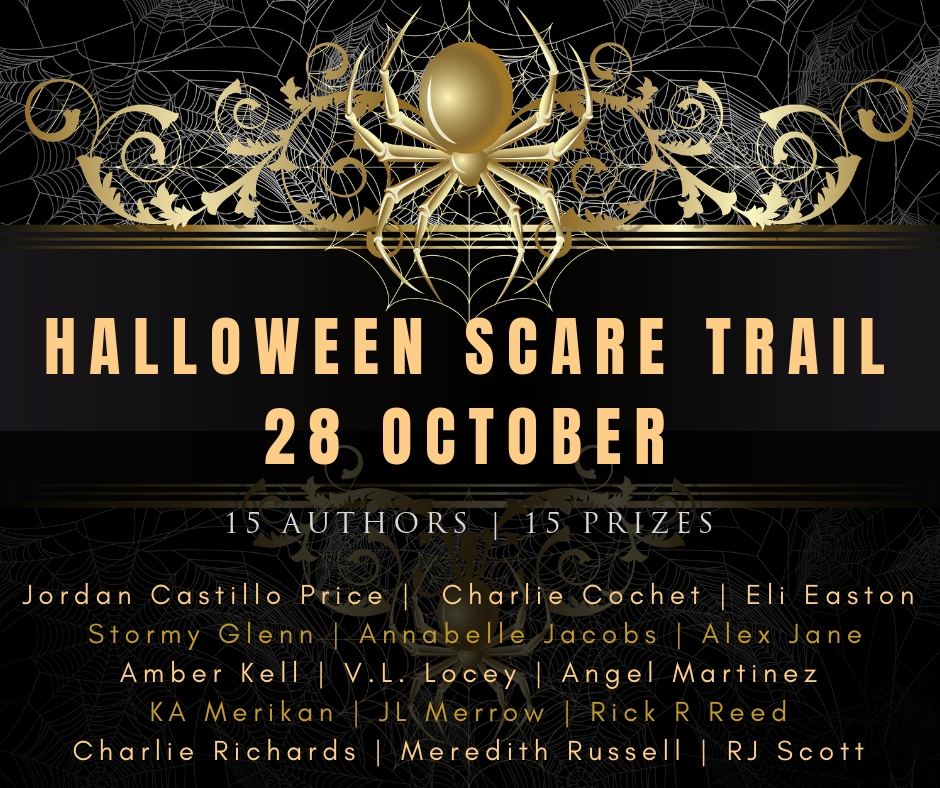