Christmas in the Sun

Return to Sapphire Cay for Christmas. 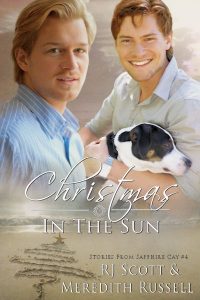 Lucas and Dylan invite their friends to share in their Christmas celebrations on the island along with Lucas’s sister, Tasha, and her husband. Christmas is a time for family, forgiveness, and to look to the future, and this year Dylan has to face up to all three.

Unearthing the memories of two men in love, frozen in time and buried among the history of the island, Lucas and Dylan realize that sometimes loving someone is not always enough. It’s about being brave and taking the next step, to learn from the past to move forward.

Family has always been important to Lucas since his own was struck by tragedy. Though Dylan disapproves of his methods, Lucas has nothing but good intentions about wanting Dylan to reconcile with his father. The two Gray men haven’t spoken properly in years, their relationship strained by heartache and mistakes reaching back into Dylan’s childhood.

Forgiveness is a hard thing to give and sometimes even harder to receive.